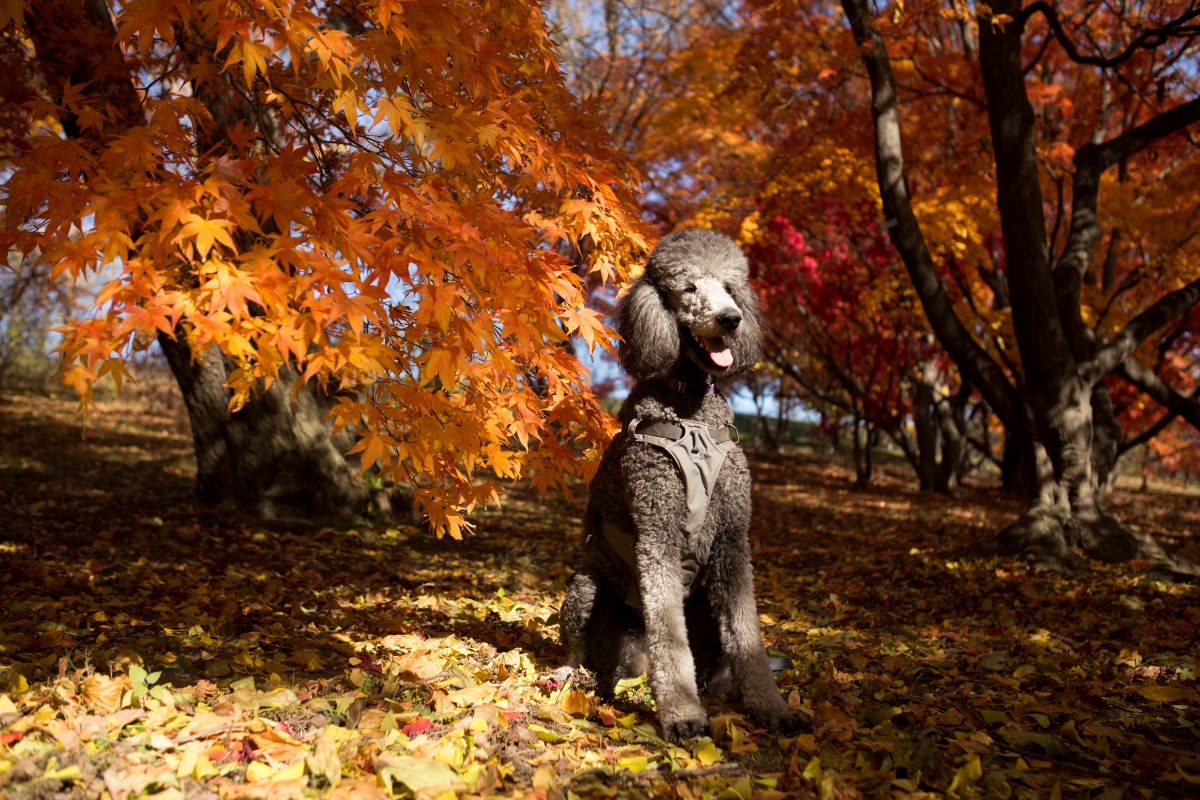 This morning, our dog Mersey did what she always does when she sees us grab the harness before a walk. She ran away.

That’s unusual in dog world. Most dogs see you give even the faintest sign that a walk is nigh, and they bound to the door tail a-wagging. And Mersey does love her walks, it’s the harness she claims to dislike. We use it because she can be a pretty strong puller, and the harness helps us control that. When we first introduced it to her as a puppy, she objected, shaking and pawing at it when we first put it on. But in a few moments she’d adjust to it and have a normal walk. After a few days even the early discomfort disappeared. Only the I-won’t-let-you-put-the-harness-on rebellion ritual remained.

She can pull if off because our ground floor has a circular layout from front-door foyer to kitchen to family room and back to foyer. Mersey takes advantage of that when she sees the harness, moving quickly to the open doorway between the kitchen and the family room, then watching us to see which way we’re going. Of course we try to preempt this by surprising her with the harness before our hand has been tipped that it’s walk time. But sometimes we fail. If both my wife and I are involved, we’ll take opposite directions to close in on her. Another option is to shut the door between the kitchen and family room to create a dead end. As we close in, Mersey recognizes she’s trapped and is pretty quick to concede, standing still while we slip on and snap in the harness.

Then she’s an obedient girl, scurrying to the door in exaggeratedly awkward form, head down, legs stiff. At the door she sits unmoving until the door opens, when she magically transforms back into her public persona as a fluid, shapely, upbeat greeter of all comers.

She likes to play games, but she knows when the jig is up.

She can be available free of charge to advise our lame-duck President Trump should he need help in such matters.

Photo at top of page: By conceding to put on her harness this morning, Mersey was able to enjoy peak foliage and unusual 70-degree temperatures in Rochester’s Highland Park.

Experts say dogs shouldn’t go distance running until their bones are well formed at about one year of age (some say even older). So I waited until after our Standard Poodle, Mersey, had her first birthday before going on a sustained run with her.

That noted, I prepared her in small ways for the big day.

First, thanks mostly to my wife, Claire, Mersey got plenty of exercise as a puppy, typically two sessions a day of walks and / or play dates with other puppies. And when I walked her, I occasionally broke into a trot, testing her and letting her know to expect more of this in her future. She responded well, immediately picking up on the new pace and matching it, like it was a game, and she wanted to play.

But that was the extent of her preparation. So when I took her out for her first run a few weeks after her first birthday, I was leaping into the unknown. Would she enjoy it, sticking with me and bounding along like we were having a great adventure? Or would she pull me in all directions, stop every 50 feet for an intensive sniff, or lag behind like I was dragging her through a torture chamber eventually pulling to a stop and stubbornly refusing to move? In a moment, I would find out.

We began by following our usual walking pattern, bursting out the door and down the driveway along with our other dog and her usual walking partner, Dusty, who my wife was going to take separately. The familiar pattern changed at the end of the driveway, when we broke into a trot while my wife and Dusty walked in the opposite direction.

Mersey was confused. She twisted and turned, trying to understand why they were walking the other way. After several twists, we were down the block and they were out of sight. She turned again as if to verify her fate then resettled into her new pace. My pace.

This is a dog who can pull intensely for long stretches of a walk. But now the rope leash was limp. She stayed close, sometimes sliding slightly ahead, sometimes slightly behind. I cheated on my usual responsible monitoring of the street and sidewalk where my feet were landing to steal glimpses of her. She seemed to be enjoying it, her head moving from side to side, focusing here, then there, watching the world roll by more quickly than usual, taking it all in. She’s an observer. In the car, watching our TV, sitting in the backyard. And now, on a run.

We ran five miles that day. She kept pace with me nearly the whole way, a feat she has repeated on every run since.

Yes, our runs have been disrupted now and then by wildlife and other distractions. But there’s no denying it: she’s a natural. I’m amazed each time I run with her that she keeps perfect pace with me for minutes on end. And I did nothing to train her. She arrived at her first birthday running ready. I just guided her out the door. I imagine there’s a method to train a dog to run with you. But this time at least, I didn’t need it.

Watkins and the Rapiers, Band